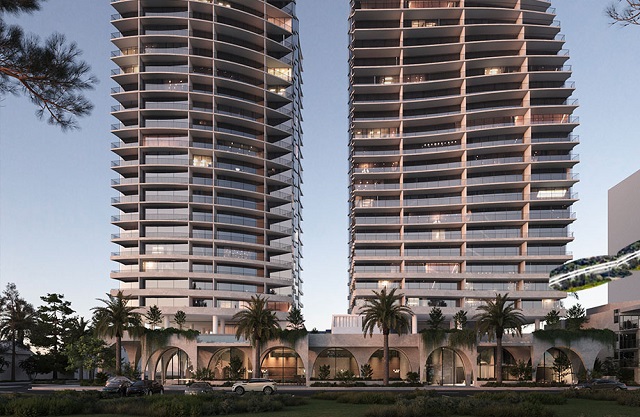 Nielson Properties has teamed up with Chris Vitale of Brisbane’s Pointcorp group to develop the $350 million project, which comprises a 132-key luxury hotel and 92 residential apartments.

Managing director of Nielson Properties, Ross Nielson, told The Urban Developer that it made sense for the two to collaborate.

“Otherwise there would have been four or five separate towers not really related to each other, while our [scheme] has a fully-integrated ground plane which leads to much better community and design outcomes.”

The proposed beachfront development on The Esplanade at Burleigh Heads includes the amalgamation of two sites—the existing 49-unit White Horses apartments and the four-unit Burleigh Court—for a total site area of 4,039sqm.

Nielson Properties has a put-and-call option on the White Horses site for $22 million, while Vitale has ownership control of the adjoining Burleigh Court at 5 First Avenue.

The existing unit blocks will be demolished to make way for the two 23-storey towers, which include a three-storey podium structure and 394 car parks over three-levels of basement car-parking.

“One of the big issues in and around Burleigh is car parking, so we’ve delivered 216 more car parks than what is required in the town plan,” Nielson said.

The parking allotment, including 162 paid car parks available to the public, will increase car parking availability in the area by 24 per cent.

The developers have committed to significant landscaping and street “beautification” in its submission to council, pointing out that vehicle access will be via First Avenue—removing car movement from The Esplanade.

The developers have signed a heads of agreement with a five-star hotel brand—which has hotels in New York and Los Angeles—to operate the purpose-built 242-bed hotel and marks the brand’s entry into the Australian market.

“The Burleigh market is quite different to what you see in [neighbouring] Broadbeach and north,” Nielson said.

“It’s a more sophisticated international and interstate market that tends to visit Burleigh.”

The 132-room hotel and 92 “luxury” residential apartments will be in separate towers, connected by a three-level podium which will house a hotel lobby, porte cochere, cafes and restaurants.

The 92 units are comprised of 39 two-bedroom, 50 three-bedroom and 3 four-bedroom build-to-sell residential apartments. The development will not offer short-term accommodation.

In its submission to council, the developers said the project will generate 150 construction jobs in the area for the two-year build period. The proposed resort complex will employ 248 full-time staff to manage the hotel operations.

In Brisbane, Nielson Properties has partnered with monied superannuation fund Cbus Property to develop a $600 million riverfront commercial building in the city’s CBD.

A heavy-hitting architecture shortlist was announced for the 205 North Quay project in August, with the winner set to be announced shortly.