‘NOBBY’S OUTLOOK’ IS GIVEN A NEW LEASE ON LIFE! 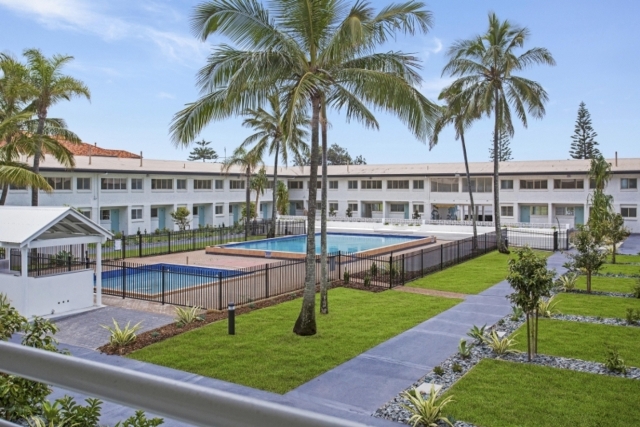 A rundown Miami holiday resort has been restored to its former glory in a move that is tipped to change the face of the suburb.  Nobby’s Outlook resort on Marine Pde has opened its doors under the new name Nalu following the year-long multimillion-dollar redevelopment.

Melbourne-based co-chief executive of Moose Toys, Paul Solomon, was behind the makeover.  He was the mystery buyer who snapped up the prime beachfront landholding at auction in September last year for $23.75 million.  He was familiar with the area after dropping $25 million in 2016 on a mega mansion just up the road.

Mr Solomon said the renovation of Nobby’s Outlook was designed to restore the building to its former “glamorous glory”.  The resort offers two and three-bedroom apartments for holiday and long-term rental.  Residents are already moving in just in time for Christmas.

“The decor of the apartments is exactly what you would expect from a modern, beachfront apartment complex in one of the Gold Coast’s most exclusive suburbs,’’ he said.  “Simply put, the apartments are excellent,” he said.  “People have always flocked to the Miami area for the sun, surf and holiday resort feel, and now many lucky Gold Coasters will be able to live here in what are effectively new apartments.”

Its sale last year ended a long-running saga to sell the property, with owners fielding developer offers since the 1980s.  Sunland offered $40 million for the property seven years ago but one owner held out and the deal was abandoned.  It prompted the building’s body corporate to successfully seek a court order from the Queensland District Court to abolish the community titles scheme to make way for a sale.